The first version of XAF I ever installed was called eXpressApp-1.0.CTP2.exe in July 2006! It has certainly come a long way since then.

This post is the first part of an overview of the brand new version XAF 13.2 which will be released any day now. This part is an in-depth review of the new report writer features (still in beta).

Prior to this version, XAF reports were not source code. They were objects serialized to a file and then loaded into the database during initialisation. This has a lot of shortcomings some of which I have addressed in previous blog posts.

But now finally it is now possible to build XAF reports directly from Visual Studio. DevExpress is calling this Reports V2 and it largely supersedes my previous workarounds. The immediate advantages of Reports V2 are:

Let’s have a look at the details. DevExpress have provided us with a new sample project called ReportsV2Demo. The interesting part of the project solution is here: 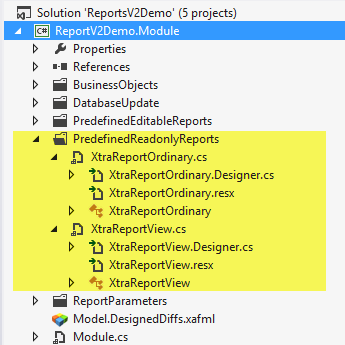 Notice that there are two folders containing reports. PredefinedEditableReports contains V1 reports. That is, the report is serialised as a string and loaded into the database during initialisation. If we look at the source for one of these, here is what it looks like:

The second folder, PredefinedReadonlyReports contains the V2 reports. With these reports, we can right-click and View Designer and up pops the XtraReport designer.

Now I can make changes to my report within Visual Studio. In theory I can preview the report and view the HTML output. However, in the beta (13.2.4) the Preview view prints the report correctly but fails to fetch any data so all the fields are empty (maybe this is by design).

(Actually, I think the names of these folders could be improved. Maybe XafReports vs. XtraReports. Or RuntimeReports vs. DesigntimeReports.)

With respect to event scripts which in the past were particularly arduous to maintain, we now have two options.

Firstly, you can continue to use the scripts as before. You can use Visual Studio’s Properties window to navigate to the script you need and then add the necessary code in the custom editor. 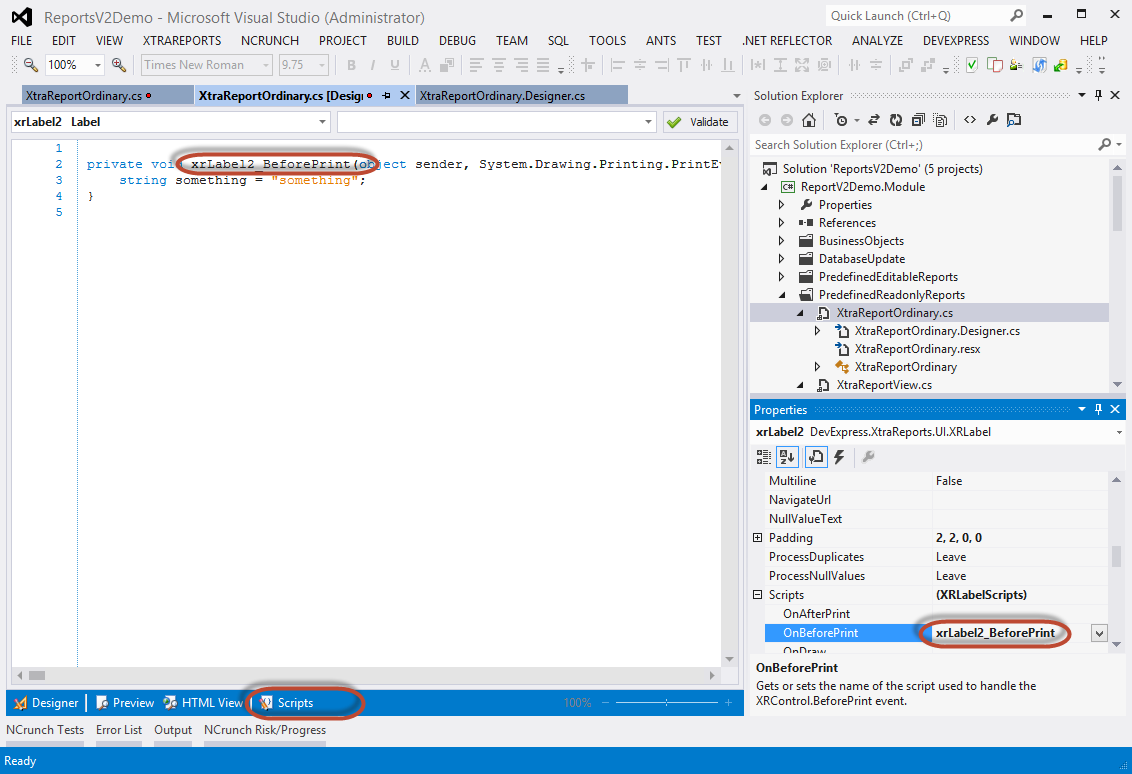 Unfortunately, this is not the best from a maintenance perspective. The Scripts code editor view is not at all comparable to Visual Studio. No Intellisense. No CodeRush. In addition, the script itself gets serialized to a string.

So unfortunately this approach does not improve things much with regard to compile-time syntax checking or code merging/version control.

Scripts option 2 - Move the scripts to the C# file

Now that the report is more like an XtraReport, we can attach an event in code. To test it I’ll replace the output of the First name with the current time.

Now let’s see if it works. We start up the web application and run the report. 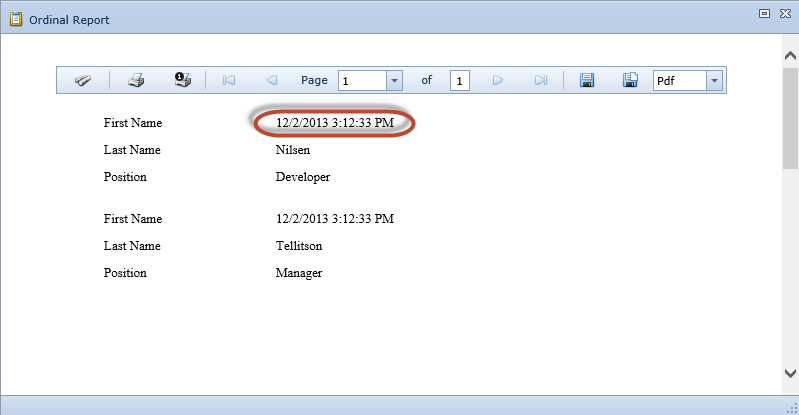 Excellent! You can see the report has successfully run the event and is displaying the current time instead of the first name. Here are the advantages of handling events this way.

Can an end-user still make a copy and tailor the report as they could with the older versions? Yes they can! Let’s start up the WinForms client and have a look. 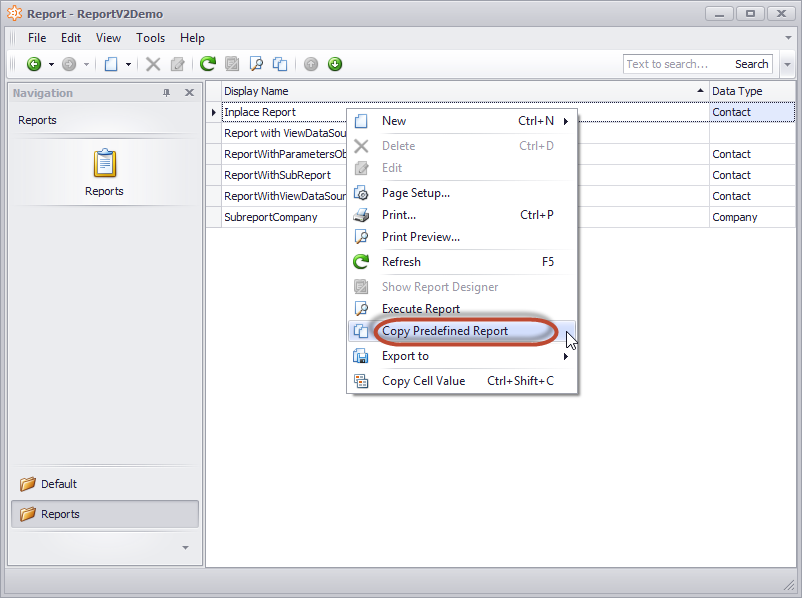 Each of the PredefinedReadonlyReports has a new option Copy predefined report. Also, notice that the Show Report Designer is greyed out. Now compare with the copy. 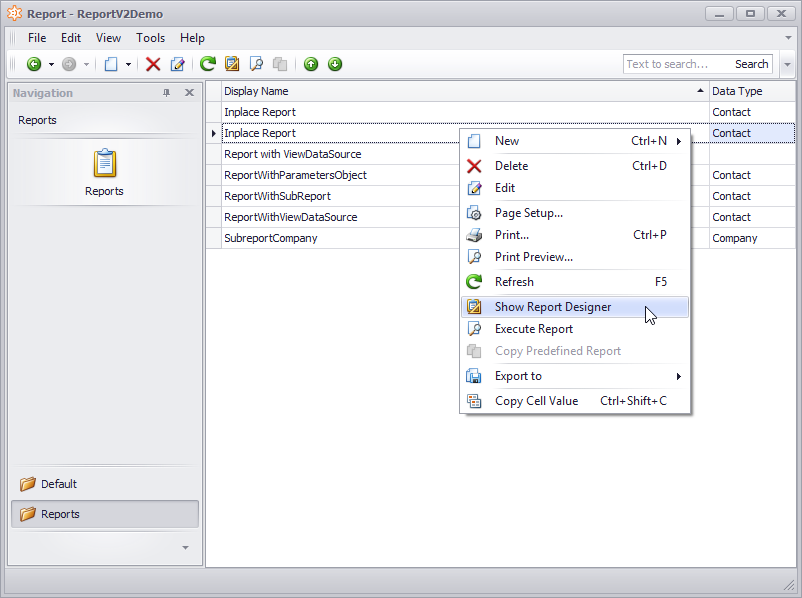 This time it is the Copy predefined report is greyed out and the familiar Show Report Designer has become available. (A little suggestion to the DevExpress crew. It would be better if the new copy got renamed to Copy of Inplace Report like Windows does when copying a file). Now we can open the Report Designer and customise the report further. Fantastic!

Let’s check what happened to our events?

Well, the serialized event was copied correctly, but the script that we put in the C# file has not been copied. A bit unfortunate - that event would have to be re-written or copied manually from the C# source file, but in most cases, additional tailoring of reports is a one-off occasional activity. For me at least, the benefits of having more maintainable code outweigh the inconvenience of losing the events when cloning a report.

Reports V2 is certainly the most significant improvement to the XAF reporting engine yet. I’m sure there are a few beta issues to iron out and a few further improvements down the line. In this post, I haven’t looked at features such as views, sub-reports and custom reporting components, all of which deserve further investigation.

In my main development project, there are currently 110 different reports and maintaining them takes some effort. Reports V2 will help considerably. Hats off to the DevExpress team.

In my next post I’ll be taking a look at the new soft validation along with some other 13.2 improvements.