The ability to create reports using a report writer is a very powerful feature of DevExpress XAF, but there are some limitations which are particularly cumbersome to deal with in complex project.

One of the projects I work on has over 100 reports in it. Even though we make use of unit tests to ensure they are not broken, the maintenance of the code in the embedded scripts is particularly difficult to manage.

These aspects of XAF reports give rise to several development headaches.

The aim of these posts is to provide a two-way conversion process between .repx and C# files. In order to accomplish this we’ll be relying on Visual Studio’s excellent T4 templating engine.

T4 Text Transformation Toolkit is a template based code generation framework which is included with Visual Studio. On top of this Oleg Sych provides a Visual Studio extension called T4 Toolbox which adds some additional features.

Install T4 Toolbox by selecting Tools/Extensions and Updates from Visual Studio and searching for it. 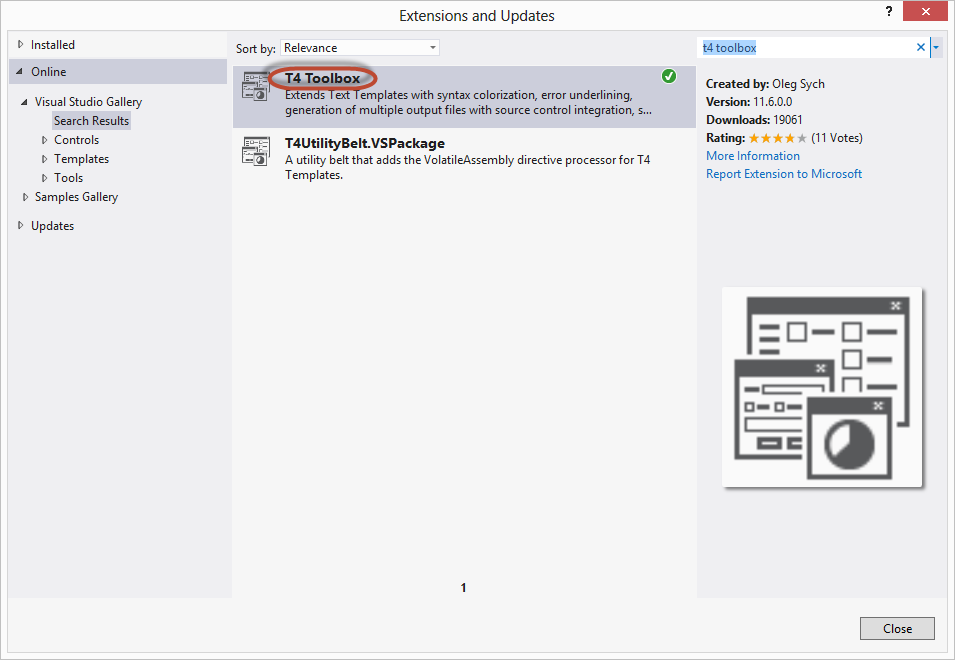 Next, download the modified MainDemo application from my GitHub repository and open it in Visual Studio.

First lets look at the embedded reports which I have modified slightly so that they include scripts. I added these scripts via the MainDemo.Win application.

Let’s look at the ContactsGroupByPosition.repx file. You will find that there is a section:

In this case, the script has been saved as a string. The other report, which has only slightly more complex script code looks like this:

Here, the scripts are not even in plain text. They have been serialised to the resources property.

You will find a new assembly MainDemo.Reports which contains a T4 template RepxToCSharp.tt. This is a T4 template which will search for repx files and transform them into much more helpful plain C#.

The template will run every time it is saved. Currently, it depends on code within the MainDemo.Reports assembly, so make sure you have compiled it in Debug mode. Then open the RepxToCSharp.tt and press Ctrl+S to save (and run the T4 transformation).

The template will generate two types of output. First, it generates the following report which you should find in RepxToCSharp.txt

In addition, each repx will have been transformed into two correpsonding files. All the generated files are highlighted in yellow: 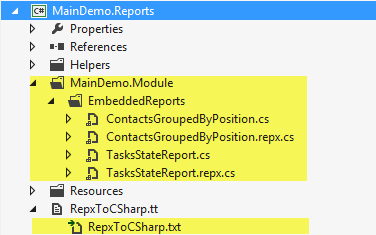 Now the scripts have been deserialized from the repx and put in a partial class and the remainder of the repx has been transformed into a corresponding XafReport descendant. See for instance, ContactsGroupedByPosition.cs (which stored its scripts as a string) is as follows:

A note about performance

The process of transforming the repx into C# is quite quick (a couple of seconds per repx), but when you have dozens of reports, it can quickly be tiresome. Therefore, there is a performance optimisation which checksums the repx and skips the transformation if it has not changed.

(In a future version, we will also use a similar checksum in the other direction to determine whether the scripts have been modified).

Now we have much more useful source files. Versions can be compared easily. The compiler will immediately inform us of any problems with the scripts within our reports.

This is work in progress. Next up, I will be adding the ‘reverse’. That is, a new transformation template which looks for scripts which have changed and ‘injects’ them back into the original repx file.